A Guide to Game Birds

Every breed of game is different and deserving of our respect 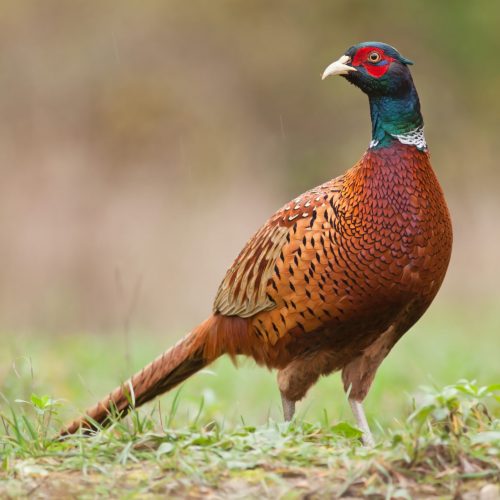 Native to Asia, the pheasant came to the United States in the late 1700s. Over the years they have thrived on American farmland and prairies, becoming a major focus of wildlife management for many states. The color palette of this American staple is almost as iconic as the blaze orange the shooters wear. Male ring-necks feature a white ring around their neck with body plumage of gold, brown, green, purple, and white. Females are much less flashy with brown feathers.

While pheasants are able to fly fast for short distances, they prefer to run. If startled, however, they will burst into the sky. Their flight speed is 38 to 48 mph when cruising, but they can fly up to 60 mph when chased. Pheasants spend the majority of their life on the ground.

Great Britain began hunting pheasants during the 16th century, but the United States didn’t begin pheasant hunting until 1892. That year, the first pheasant-hunting season opened in Oregon, and hunters reportedly bagged 50,000 birds in 75 days. Today, successful pheasant hunting requires knowledge, experience and scouting. The pheasant is full of tricks such as holding tight, flushing out of gun range, running, doubling back and sometimes sneaking right past you.

The Northern Bobwhite Quail, also known as Virginia quail or bobwhite quail, is native to the United States, Mexico and the Caribbean. It is the only native quail in the east and the most common species of quail. It’s whistled “bob-WHITE” call is a familiar sound in spring in farmland and brushy pastures. Bobwhites are small quail with rounded bodies, small heads, rounded wings and short tails. Males have a bold black-and-white head pattern, while females a plain brown and lack the facial markings.The quail is a ground-dwelling bird, but can have a flight speed of 30 to 40 mph. Like most game birds, the bobwhite quail is shy and elusive. When it is threatened, it will crouch and freeze, relying on camouflage to stay undetected. When they are flushed, they explode into flight with quick wingbeats and then duck into the nearest cover.

The bobwhite is often referred to as the number one game bird of the eastern and southern United States. When hunting, it is widely known that these quail are more often heard than seen, since they tend to stay within dense low cover where their dappled brown-and-white plumage provides excellent camouflage. Listening for the quail’s distinct call can be the best method to hunting down these birds. Bobwhites are almost always in coveys of around a dozen. When a covey is located, they will typically flush from the area and it is easy for hunters to “flock shoot,” but it is recommended to concentrate on a single quail at a time. 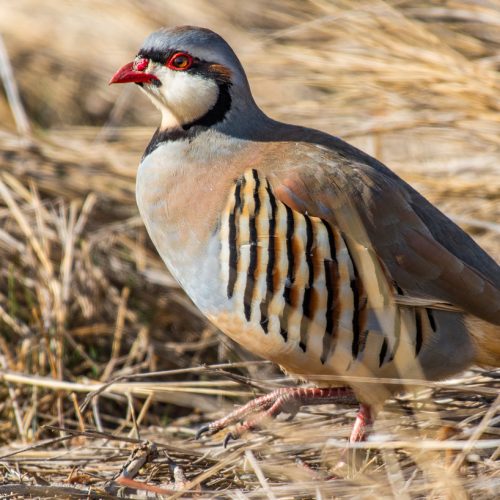 Introduced from Eurasia, the chukar is a game bird that lives in the high desert plains of western North America, as well as in Hawaii and New Zealand. This partridge is shaped like a chicken, with a plump body, short legs and a round small head. It stands about 13-15 inches in length. Chukars have a brown-grey base with a red bill and a dark band going through the eyes, wrapping around their white cheek and throat. The chukar rarely flies, spending most of their time on the ground. Chukars are very social birds and like to stay in groups, called coveys.

Often called “devil birds,” if you’re hunting them correctly, they will have you running and sweating. Chukar hunting is the epitome of the chase, and most shooters say it is the best adrenaline rush for a bird hunter. The ideal way to hunt chukar is with two hunters and a pointing dog. Being very quiet and stealthy is essential since they are very fast and skittish birds.